How to get started in film photography. Have you been drawn to work of film photographers’ work lately? If you’re thinking about giving it a try, don’t be intimidated! It’s actually very easy to dive in. Here are a few things to consider as you get started: Equipment. You don’t have to buy the most expensive film camera to get great images. As you’re testing out film, start off by buying a used 35mm or medium format camera and a 50mm lens to go along with it. Our friends at Used Photo Pro usually have a great selection to choose from and are very thorough at testing any used equipment that they sell.

Film. The beauty of film is that it captures a wider dynamic range than what you can get with digital images. There are many types of film out there. A common favorite is Kodak Portra for color film or the Ilford for Black and White. You will need to get familiar with the choices of ISO, which means you have to think about what you’ll be shooting and the type of light that you’ll have access to.  A safe bet on ISO is a speed of 400, however they go lower and high depending on how much grain you want in your images. Color film also comes with different vibrancies so you’ll have to test out the different types to see which one matches your style. B&H always has a great selection of film to choose from.

Practice, practice, practice. Shooting film is a big change of pace from digital. Because you only have a limited number of frames, you really have to slow down and think through your exposure and composition before taking the photo. There will be times where you mess up, and that’s ok! Just have fun and experiment. As with any new photography technique, you’ll want to take time to play and learn before offering it to any paying customers.

Processing. Local film processing labs are getting harder to find, but there are plenty of great places that you can send off your film to be developed and scanned. A few industry favorites are Richard Photo Lab, The Find Lab, Indie Film Lab, and The Darkroom. Print laboratories like Millers offer film developing services, too. Do your research and find a company that works best for you. 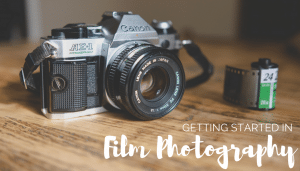 Do you shoot with film? What are your tips for someone just starting out?

Making the jump to newborn photography.